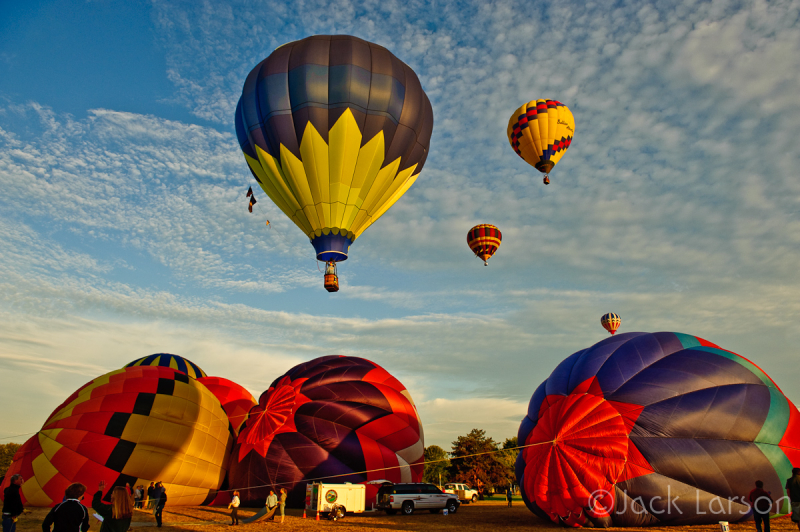 GOOD NEWS - Nikon fixed my 24-70mm lens on the second go around and overnighted it back to me (got it yesterday). While they had it, they cleaned it and checked it out with their sophisticated equipment. It's probably better now than when I bought it.

Oh, the show is over. ;-(
A wonderful series. We all definitely got our enjoyment's worth out of your fortuitous hour of shooting !!!
I'd say the hallmark of each of the images in the sereis was exceptional clarity
and exceptionally brilliant color.
That is what stands out for me.
Superb!

@Dulcie: Thanks, Dulcie. I would say that the clarity was due to the lens. And that the color was due to a combination of the brilliant color of the balloons, the early morning light and the Nikon D700.

A riot of brilliant color and a wonderful sky...well done Jack!

What a finale!!! What a great series!!! Good news about your lens:-)

I am breathless. Awesome series.

Beautiful shot!!! I love the colours. Thanks for sharing this series - I really enjoyed it.

Superb, The sky and the colors are splendid. well done

Marvelous series. Each one bursting with color.
I like how the balloons have such a 3D appearance in the air of this shot.
Incredible processing on all of these. Well done, Jack.

I love this serie ! It makes me dream...

This is so magical!!!
I love the series!

A wonderful picture to end that serie. Wonderful light!

@akarui: Thank you. The light was indeed phenomenal.

A wonderful finale and a very well-spent hour with your camera!!!

a beautiful hour... and the colors are so beautiful and sharp.... great series

What a success this series has been - simply splendid. I'll bet all those who attended the show would love to see these shots!!

You aquired a lot of beautiful shots with that hour and this one is no exception. Wonderful series Jack.

A fantastic ending of this vibrant and colorful series and you were really lucky with the weather circumstances, because that beautiful sky brings out those colors really well.

@Monique: Thanks. You are absolutely right about the weather. The next two mornings of the Air Show were not nearly as nice.

It's been a fine series of spectacular pictures. Exceptionally well done!
Congrats!

Another great shot from this series :))

Another great shot and a wonderful series. An hour well spent!

Another wonderful composition. I can't imagine how you'd have waited for the balloons to be rightly position before clicking the camera.

"I believe I can fly" for sure here - and always these dreamy colors to heat our imagination (at least ! :)
Very very heart-opening serie* Merci !

simply amazing! i have no words to describe how much i like it! i like the sensation of fantasy that gives the clouds and the reality that transmit the people on the ground.

This is such an incredible series of shot Jack. Each one is a gem. There is something about at hot air balloon, and although I have never had the pleasure to see anything like this in 'real life' you photos have created a magic within. Thank you for these :)

@bluechameleon: Thank you for your kind words, Sharon.

Considering that all these photos were taken within the span of an hour, I believe you captured some great highlights! You couldn't have asked for a better day for photography...or hot air balloon riding. So does this mean you never went up in the air? :-)

The balloon shots have all been awesome! Great colors, great use of the light, great composition! Thanks for sharing them all!

@Jen: It was a magical hour. In fact, I didn't realize how magical until I downloaded everything.

I have just LOVED this entire series.......You did a phenomenal job.....and now that you've realized you didn't get a shot of all of them in the air, it'll give you something to look forward to, to make sure you catch that shot next time!!!

@susan: Thanks, Susan. To be honest, I don't think that there is a shot to be had of all of them, but one could certainly get more of them.

I've loved this series. So much color and great shapes!

@willow: Thank you. I am just about colored out!

Another beautiful shot... Jack, sorry this series is over, but on to other shots now, eh? Even though you didn't get a shot of 40 balloons at once, we get the idea, a wonderful series.

Every time I think I've seen the best of the series you post a better one. Incredible.

@jeff (aka dogilicious): Thanks, Jeff.

a very nice composition and colourful

This was one of my favourite series here on AM3 - spectacular!

@Magda: Thanks; it was a super hour.

The sky and the colors are splendid.bravo !

This is so lovely!

This is insanly clear, what lens are you using if i can ask. Awesome