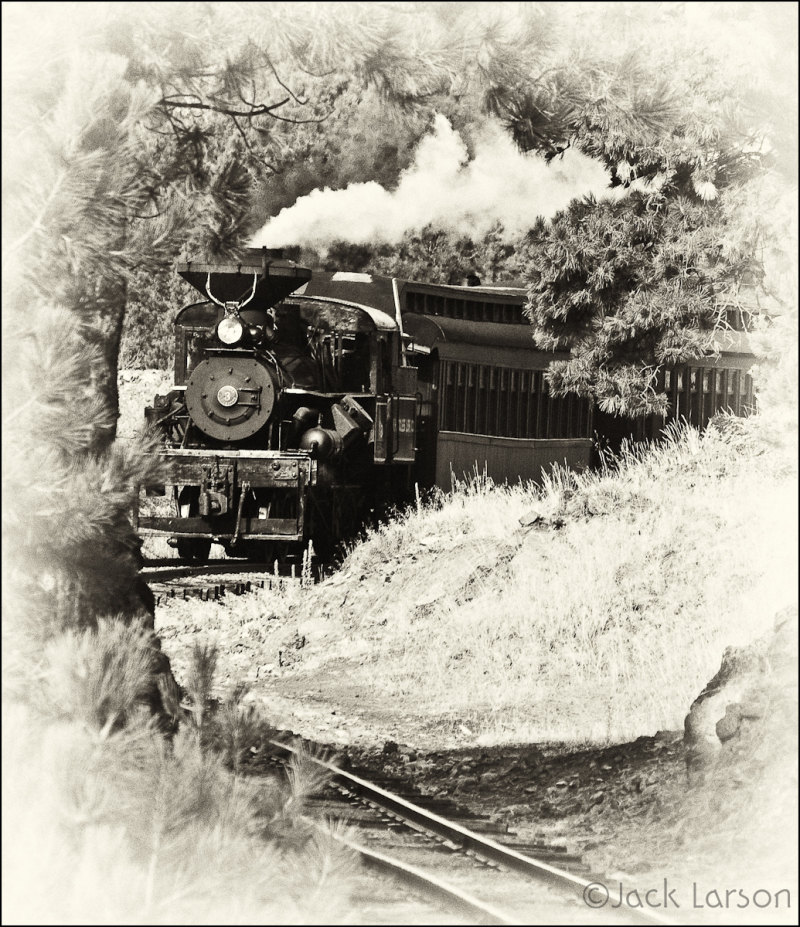 Posted by john4jack (Corvallis, Oregon, United States) on 31 October 2009 in Transportation and Portfolio.

CREATIVITY AND CRAFT - These quotes were on Dave duChemin's blog.

“You’re only kidding yourself if you put creativity before craft. Craft is where our best efforts begin. You should not worry that rote exercises aimed at developing skills will suffocate creativity. At the same time, it’s important to recognize that demonstrating great technique is not the same as being creative.”
-Twyla Tharp

“Without passion, all the skill in the world won’t lift you above craft. Without skill, all the passion in the world will leave you eager but floundering. Combining the two is the essence of the creative life.”
-Twyla Tharp

The B&W processing and the vignetting effect are perfect for this subject and this image. Wonderfully done. I particularly like the inclusion of the rail in the foreground which give the scene even more depth. The quotes you added are a special bonus. I totally agree with the sentiments.

The framing for this train is brilliant...and the white vignetting is effective.
Even the over-exposed look is just right.
BTW, thanks for adding the T. Tharp quotes.

@Dulcie: Thanks, Dulcie. It was done with a preset in Silver Efex Pro.

Great shot! I like the vignetting and framing. Can't wait to see the rest of the series :)

@Anina: Thanks. Tomorrow we head back to earlier in the trip. It's over two weeks until more trains.

My first thoughts too were the framing of this train is brilliant (Sorry Dulcie lol) phenomenal tones, such a dreamy feel to it and I love trains...its distant sound, sheer magic to me, there aren't enough stars for this Jack :)

@Lorraine: There certainly is something about old trains.

wonderful shot, the processing gives it a wintry feel :)

I dream to have the opportunity to travel in this kind of old train... must be so... romantic !

@Florence: It was especially romantic before we had been in and out of the cars 25 times.

A lovely shot as it comes around the bend into the photograph. Interesting processing.

I love the way the processing puts the emphasis on the engine. I LOVE steam locomotives, and this is a beauty! Thank you for sharing!

@Betty: The super steam engine is coming in a couple of weeks.

Interesting frame Jack...almost looks infra red...nice timing...great to see these old things run, huh?...and them dancers can teach us all a thing or two I say...

The iron horse, Jesse James and a whole bunch of indians...! Great shot and processing Jack.

@Michael: Many thanks, Michael.

Very cool framing for the shot.

Beautiful shot, and like what you've done with it......

Incrdible shot and framing! Looks like a christmas card

Very, very well done - and the result is perfect!

I love this framing and beautiful processing ! Very nice !

Completely classic, Jack. I love how that round frame has come up.

yes wunderfull i give you 5 stars

Marion from Nanaimo, BC, Canada

The vignetting and the b&w processing make this beautiful steam engine look like it is coming out of the past. I know that my husband, a lover of trains will fall in love with this picture, just as I have. Wonderful photography and processing.

@Marion: Many thanks. I have a bunch more narrow gauge track trains coming up in mid-November as part of the Sumpter series.

Excellent processing and composition. Looks like a poster for a movie.

Outstanding! Remarkable composition and processing. I like the part of tracks in foreground.
What an incredible photo journey this was.

@Barbara: Thanks. I think that in large part it is the processing that makes this photograph.

Cute compo =) like a postcard from the 19th century =)

Extraordinary image. The two quotes are perfect. I guess there is a balance between craft, creativity, individualism, and just having fun. I've noticed lately that my photographs seem to be a reflection of the glasses I'm wearing. LOL True statement.

@Cricket-TammyWarren: My belief is the creativity trumps craft, but an internalization of craft greatly enable creativity. And in my photography, fun trumps all of it.