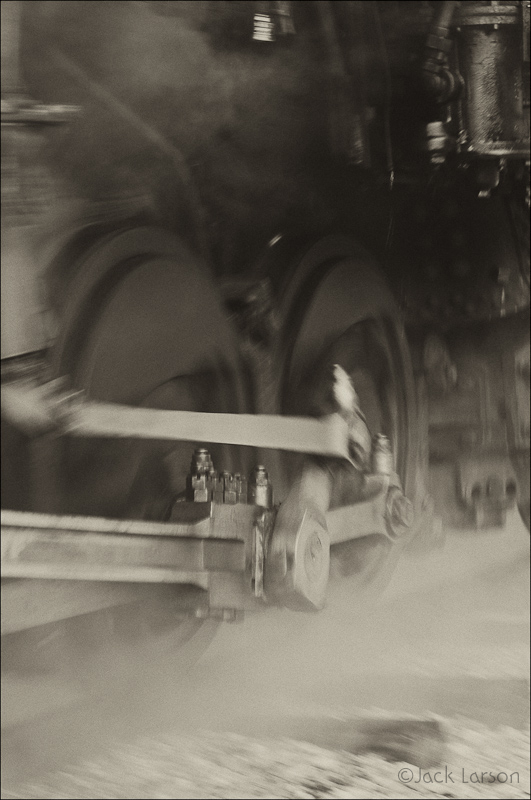 Posted by john4jack (Corvallis, Oregon, United States) on 26 November 2009 in Transportation and Portfolio.

THANKSGIVING, which we celebrate in the US today, is my favorite of all of the holidays. The entire nation, no matter what ones race, religion (or lack of religion), creed, politics, or anything else, the entire nation pauses to give thanks. I believe that all meaningful living is grounded in gratitude.

I love this. Great sense of movement.

Lyl and Roll from Besançon, France

WOW ! Great Jack ! We here the monster from here !

This is one of your best! Super! Such a movement in one picture!

Superb...one of my favorites! This has movement and mystery and emotion. Fun to see you use Sepia, too.

@Dulcie: This just may be the best shot of the day on the Sumpter Railway.

I prefer your yesterday shot

@Marie LC: That's what I love about art; we are each free to have our own preferences. Personally, I think that this is a superior photograph; as I've said, the best of the day on the Sumpter Railway.

Here is which is interesting !
We guess the train thrown to full speed ! Attention not to take risks (laughter)

WOW! A very inspiring narrative - thanks Jack. You have me thinking...
I can see why this is one of your favourites - I love it. Great sepia tones and movement. Well done
Happy Thanksgiving :)

Marion from Nanaimo, BC, Canada

Boy, does this ever give you the sense of motion and travelling. Excellent processing. I love it. Happy Thanksgiving to you and yours.

Happy Thanksgiving to you. You have captured the energy in this shot..hope you have energy like this later today after you've eaten all that turkey!! ;o)

Beautiful imagem. The sensation of movement is fantastic.

Ha, we think alike today, it seems, not scared at all in experimenting slow shutter speed the same day ;)) Love that silent connection, Jack - and of course I love your photo, the movement here is palpable and, once again, it brings (even better) the sound with it. Totally successful attempt ! Let's have fun with our cameras more than trying to do Perfect stuff (since Perfection does not exist and is rather boring for sure ;)

Wow, a very good shot, I like very much the ambience created and the protagonism of the wheels in motion.

Tremendous, power and motion together in one shot.

@Hiro: Generally I don't make comparisons. Each photograph needs to stand on its own. 1/30 seemed to create the effect that I wanted. Of course, to some degree, it was luck. The task is to organize your luck.

@MARIANA: Merci. I'm not quite certain why I like this shot so much but I do.

This is fab....you are making it difficult for us to pick a favorite. Love the motion in this one. You can feel it and hear it.

@Macrobaby: There is absolutely no need to make choices. Each stands on it own two feet. Thanks for your comment.

I can feel the sense of speed. Great choice of mono for this image. Great framing too

@Magda: Thanks. It demanded B&W.

A very strong image for its capture of the essence of motion. The shot is filled with the feeling of power. The question raised about safe and boring is one all of us should think about. I think I've made many, many safe and boring shots! :-)

@Slackwater - don: When I look back at some of my photographs, it is downright embarrassing!!

Wow, how close were you? WoW! Happy Thanksgiving, Jack.

Around the world ?!? I come with you.
Thanks for your com of the day Jack.
I feel sorry for you, as I was also yesterday...

Yes it was my birthday, right. But it's also 45 years that I live without my twin sister. Of course, I 'm aware that the most important is that I'm alive and healthy. But... well, I miss her sometimes. Often, would be more relevant.

I'm leaving Paris for a long w-e. I'll back on your blog by the beginning of next week.
Have a nice week-end Jack.

@zOOm: So sorry to hear about your sister. That's tough.

I like all the shots. This is a great one with all that motion. Very well done.

Great capture Jack. The light and the motion is superb!

i hope you used a big lens on your camera. i'd never get that close to a moving train. they are noisy, windy and scary up close.

@Seraphine: I was awfully close.

I love it. I don't know how you managed it. But this is a gem.

@Ajay: I got in close and used a shutter speed of 1/30 sec. What amazed me was the way that certain parts of the image (some of the bolts for example) ended up tack sharp. The train was really moving.

A nice capture of action with the blur of the wheels and the dirt cloud. Love your sentiments about Thanksgiving. Now if was all but one day a year. :-)

Spectacular! Jack, I think you need to make a "Blurb" book with all your train photos in it. I would definitely buy it! :)

@dj.tigersprout: Thanks. Maybe my favorite of the series.

Francesc B. from région parisienne, France

@Francesc B.: Merci. I love this shot.