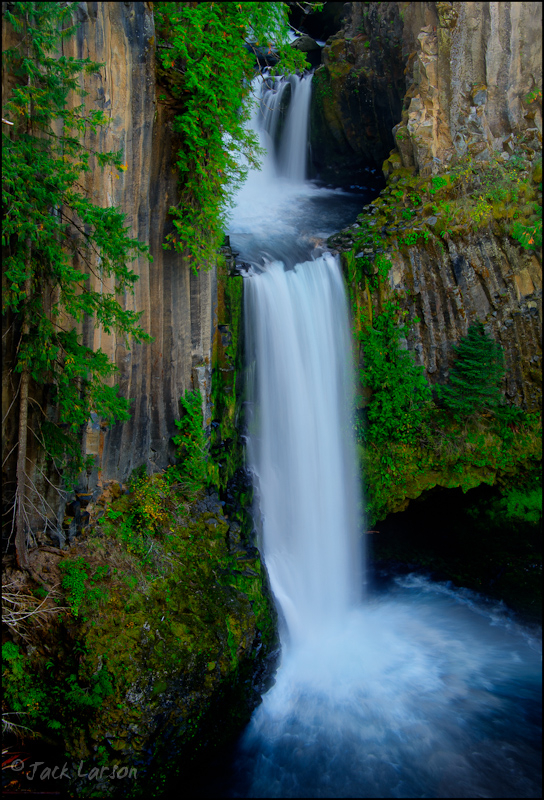 UPDATE TO HOGAN ON UPGRADING -

"Broken Record
Oct 19 (commentary)--Yes, I know that sometimes I sound like a broken record, but the D7000 questions popping up in my In Box also seem like a great deal of deja vu.

People seem to believe that a new camera magically makes their photos better. I would say that this is typically not the case, and for many reasons. Here's just a few:

We're in the age of declining returns. While more megapixels sound great at the simplest level (Act Now! 16 is better than 12! 14 is better than 10!), it actually takes 4x the pixels to double the capture resolution (e.g., to double 12mp's resolution, you'd need 48mp). When you subtract out diffraction impacts, the actual change in measured resolution in the new cameras is relatively modest, about at the threshold of what can be perceived at 100% view. The simple fact of the matter is that many people want more pixels because they have the wrong lens and need to crop more. If you can't see that this problem is more easily fixable by getting the right lens or spending a little more time on your composition, a new camera isn't really going to help as much as you think (and is going to increase your workflow if you're cropping everything after the fact).

Noise isn't really measurable, it's mostly perceivable. Yes, technically we can "measure" noise, but the measurements you see posted all over the Internet are mostly meaningless. You can have the same noise measurement from two cameras and one will simply look better than the other to most viewers. Beyond that, luminance noise isn't all that objectionable in the first place, and Nikon bodies have long been good at banishing color noise. One of the primary drivers of "I want better high ISO capability" is again using the wrong lens. If you're using a kit lens that's at f/5.6, you're two stops worse than you'd be with the f/2.8 fixed lens. The latest cameras aren't two stops better than the last generation. You may be better off buying the right lens than a new camera.

Your images should already be better than film quality. There hasn't been anything wrong with DSLRs for some time (I'm tempted to say going back to the 6mp cameras, but certainly since the 12mp generation). I've long preached that if images you print at the maximum size of a desktop inkjet (13x19") aren't good, then it isn't the camera that's the issue. The problem is how you set it or used it. When I say that, the claim usually becomes that newer camaras should set themselves better. Really? In what way? Exposure in Nikon bodies has always been quite good (and you D80 users only had to move to center-weighted metering and learn to use that, so the exceptions haven't been all that problematic). We've had Active D-Lighting and other "magic" settings in our DSLRs for awhile now. No, it's the gross user errors that people are expecting to be fixed, but people who aren't willing to fix those themselves probably shouldn't be using DSLRs--they're buying a lot of buttons and controls for nothing.

This isn't to say that there aren't people who should upgrade. (Yes, I too had to read that sentence a few times to make sure the double negative was right ;~). But you have to be realistic about what it is that you're getting by updating."

That is so beautiful that it looks like it can't be real. How stunning. (And I am so jealous.)

HDR's aren't my cup of tea, but I can see how this one fills the bill for those who like this kind of effect.
And your catch of this three level waterfall is inspiring...I want to go there and see this !!

@DULCIE: to my eye, it doesn't have that much of an hdr effect. it really looks very much like it actually was. next week i'll show you some more creative stuff.

With the Spirit of Marylin all around...

All I can say is WOW for the 5HDR. Super processing Jack.

@Florence: Thank you. Getting the shutter speed right is not easy. I have to be careful not to shoot too slow.

A wonderful reading your lecture. I humbly believe that you have every reason in the world. I say this with the limited knowledge I have of the world and the wonderful digital cameras that are put on sale every day that passes. I think I told you once ... You have good insurance photographic equipment but you get excellent results every day are the result of your intelligence and your photographic art. This if I'm sure master! Without any doubt! This is not improved ... is so because at the moment! The photographic act itself is a certain image that resonates in the interior of the fans ... something that the machine does not know or can do ... it is up to you! When an image does not know "talk" with or without sound ... is a failed gesture of the photographer.
At the moment nobody has convinced me I'm wrong! And I'm old enough now ...
And when I leave here ... I hope I have managed to express myself in my "excellent" English! I'm going to dip between the beautiful women are definitely water in your transparent waterfalls .... I can hear his music to speak ... your spirit has brought them full of photographic magic for those who believe in you and in your art!
A kiss and a hug for you, Master Jack! Adela

@Adela Fonts: you are incredibly kind

I can sum it up as Gorgeous and delightful

Beautiful capture, like the patterns of the rocks all around the waterfall and its rendering like a wedding veil.

Beautiful capture, like the patterns of the rocks all around the waterfall and its rendering like a wedding veil.

I can see why it is one of the most photogenic waterfalls in the area! Although I am not much of an HDR fan, this shot does not have a strong HDR feel to it! The strong contrast between the falls and the surrounding rocks is exceptional! Well done Jack! ;-)

Absolutely awesome!
Like the "lines"!
All blend in pretty well.

Such a beautiful capture of these majestic falls, very subtle HDR work, looks so realistic and real as if viewing it directly

That is one gorgeous waterfall... and you've shown it very well with this image. I'll be interested to see the results of the new HDR program.

I know where I'm headed when I get up to Oregon. Just beautiful as is your composition and processing.

This is very spectacular and a beautiful shot well composed even if I don't like so much treatment !

I like HDR photos like this that do not look fake or "so HDR" that they do not look natural. This is gorgeous, Jack.

Your words today make much sense!! I'm sure the camera companies wouldn't like you advertising for them......but it's oh so true !! And you know I'm a freak for any hdr's, and this one is wonderful !! I just love the texture of the water in a shot like this !! Great work !!!

superb waterfall photo! love the saturation of the greens - they look so lush and mix well with the rocky surface! great work on the exposure as well!

Stunning capture and very majestic composition! Wonderful color and texture! I love HdR in all different ways depending on the shot and it depends weather you want it to look real or surreal! It depends , but i like both! We all have a different eye, and taste, and there is something for everyone! An artist should explore and experiment with techniques and tools. You never know what you will find! This is a magnificent image!

@Wild Mustang Photography: thank you. you are very kind

Spectacular shot of a specacular location. Your upgrade thoughts are interesting too.

I am numb from the beauty.
The most beautiful image of a waterfall I've ever seen.
I like the way it carved out the rock.
A 5 shot HDR, superb work, Jack. That gave remarkable results with the moving water.
Interested to see the outcome with HDR Efex Pro.
Ditto on the point you express today.

@Barbara: Thank you. This actually was done with Photomatix 4 (before HDR Efex was available; all that has changed; now I am doing almost all HDR work with HDR Efex).

I read your note on the UPDATE HOGAN on modernization -

And I asked myself the same question! Why this profusion of new machines from Nikon which I believe undermines their professionalism! I know the D90 perfect little pocket-sized, I work with the D700 extraordinary case and I do not speak D3X but extremely difficult to control image rendering and especially low grades is fabulous! I think Nikon may well cover the demands of photographers. I think by then join your analysis perfectly
As for your picture of the day, I'd give anything to see one day such a stunt! Superb ......

amy from Nanaimo, BC, Canada

Fascinating and enlightening editorial there Jack. Thank you for that! Your image is PERFECT! Again I say I wish I could go shooting with you ;-)

@Steve Rice: Thanks. This is my absolute favorite HDR photograph of mine (Photomatix 4; before HDR Efex was available).